The Heart of the Continent Partnership has partnered with National Geographic Society (NGS) to create a regional geotourism initiative, including an interactive map and website.

Scroll to bottom for media coverage

We are accepting nominations for places, activities, and businesses to be included in the website. Go to traveltheheart.org and nominate your business, or nominate a special place that needs to be shared. There are instructions about how to register and what to include in a nomination there. 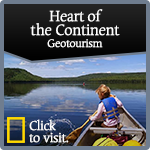 Drawing input and involvement from a wide spectrum of local stakeholders, this geotourism project will help sustain and enhance the geographical character of the region — its environment, culture, aesthetics, heritage, and the well being of its residents — by highlighting the outstanding natural, cultural and historical resources and historic gateway communities in the Heart of the Continent bi-national region. HOCP will become a part of NGS’s network of interlinked geotourism websites, gaining great visibility, visitor-ship, and awareness for our region — and its wonderful natural and cultural assets.

Geotourism is tourism that sustains or enhances the geographical character of a place—its environment, culture, aesthetics, heritage, and the well-being of its residents.

Geotourism incorporates the concept of sustainable tourism — that destinations should remain unspoiled for future generations — while allowing for ways to protect a place’s character. Geotourism also takes a principle from its ecotourism cousin, that tourism revenue should promote conservation, and extends it to culture and history as well, that is, all distinctive assets of a place.

What are examples of other places that have geotourism initiatives?

NGS’s Center for Sustainable Destinations has partnered with a host of regions to create a framework for engaging communities and creating a regional geotourism infrastructure in locations across the world. Some examples in the United States include the Four Corners Region, Greater Yellowstone, the Central Cascades and California’s Redwood Coast.  The Crown of the Continent region is another example of trans-boundary geotourism project that encompasses Montana, Alberta and British Columbia that participate in the NGS Geotourism program.

How can I participate?

HOCP’s geotourism initiative in the news

“What is Heart of the Continent?  Cross-border collaborative promoting natural, economic health of vast area, from Quetico to Lake Superior, including Ely attractions. “ Ely Echo. 29 Aug 2014.

“Geotourism Project in NE Minnesota: the public can get involved in a geotourism project in northeastern Minnesota that is backed by the National Geographic Society,” Almanac North (Duluth, MN): June 27, 2014. Start viewing at 17:43

“Submit Your Nominations – What’s so special about your place?” Hibbing Area Chamber Weekly Bulletin: May 28, 2014

“Nominate Special Places for National Geographic Guide to the Heart of the Continent Region,” Wilderness News Online, May 15, 2014.

“Northeastern Minnesota and Northwestern Ontario launch geotourism project for the Heart of the Continent,” The Ranger, IRRRB (Eveleth), May 14, 2014

“Heart of the Continent geotourism project to be launched,” Hometown Focus (Virginia), 25 April 2014.

“Promoting Geotourism on both Sides of the Border,” St. Louis County Newsletter, 14 February 2014.

“Town to back National Geographic project for Heart of the Continent,” Atikokan (Ont.) Progress,  13 August 2013

Our licensed essay freelance writers can assist you out directly on time. We can easily ensure that rapid essay author means not simply swiftly and bang in a timely manner deliver the results and also acceptable and handled operation write my essay for me

Our a professional essay freelance writers just might help you out directly on time. We could make sure that quickly essay article author signifies not just quick and bang by the due date job along with ideal and regulated approach essay writer service

Heart of the Continent Gatherings are to spur conversation on sustainable recreation and tourism, science and economic growth in the region. We had hoped to have our gathering last spring but will be postponed until further notice. Feel free to contact us if questions about participating in our gatherings or projects.